To Restore Our Earth, Youth Lead the Way

Editor’s Note: This blog is the first in a three-part series for Earth Day 2021, with the theme “Three Days of Climate Action.” Today’s focus is on youth. Read more below!

Around the world, youth are leaders in the fight for climate justice. They know they will feel the consequences of climate change long after today’s leaders are no longer in power. We may think of towering figures, like Greta Thunberg, who addressed the UN Climate Action Summit in 2019 and has been nominated for the Nobel Peace Prize in three consecutive years.

Perhaps unknown outside their community, but quietly, incrementally, the students and staff at Hope for South Sudan (HFSS), a residential school for children of all ages in Eastern Equitoria state, are also becoming leaders in the fight against climate change. They, like most smallholder farmers around the world, are already bearing the brunt of extreme weather events — erratic and unpredictable rainfall, droughts and floods — that have prevented the school from achieving self-sufficiency in food production until now. With the launch of the Empowering Leaders through Nutrition-Sensitive Agriculture project (ELNA) in 2020, that is starting to change.

HFSS’s agriculture staff and Rise Against Hunger’s technical advisors have introduced organic agriculture on the school farm. Working alongside the farm staff, students and community members are beginning to learn and apply these agriculture approaches that preserve nutrients and transform waste in the farm system. Utilizing natural fertilizers, like compost or manure, and practicing minimal soil disturbance, HFSS already achieved a record 67% increase in maize yield per acre in 2020. As the team set to work, clearing more land for staple crops, they agreed to cut down the existing vegetation, rather than burn the field. While more labor-intensive, this approach maintains soil fertility and avoids emitting black carbon pollutants into the air.

Another way that young people at HFSS improve the environment is by using naturally occurring materials to create nutrient-dense vegetable beds. Omene, a 30-year old farmworker at HFSS, applied the techniques of double-digging garden beds which Bryan Pride, Rise Against Hunger’s Agriculture Technical Advisor, taught on-site and via training videos.

“My biggest accomplishment so far is being a part of the team which produced 88 kg of leafy greens in March 2021!”

These highly nutritious ingredients were used directly in the school meals. Omene has also applied the techniques he learned at HFSS to his own farm, growing two types of vegetables so far. 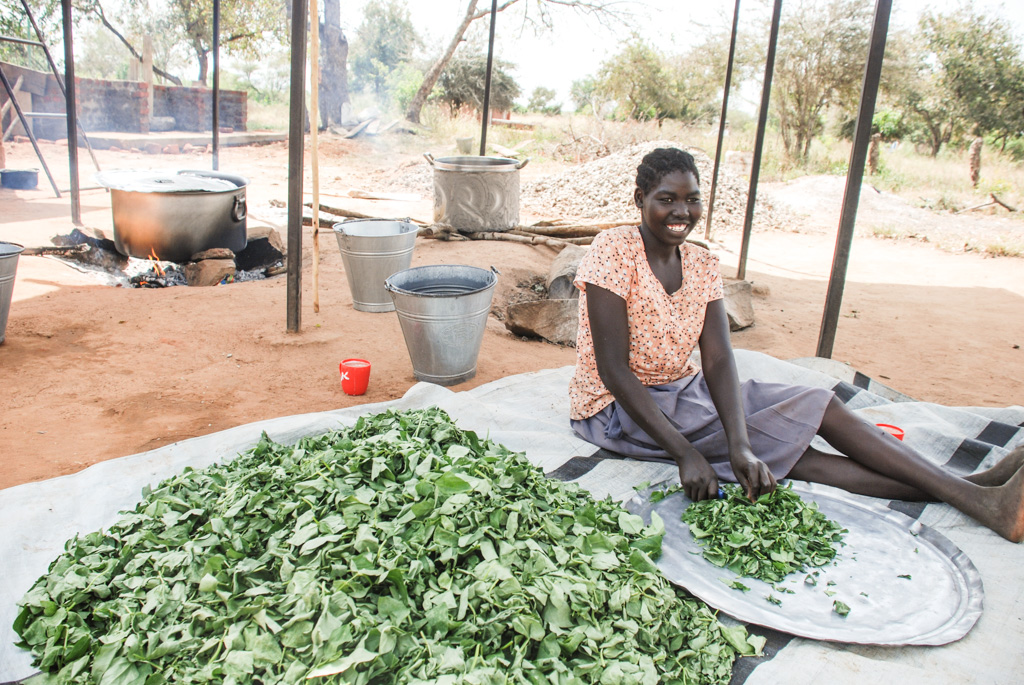 He shared, “Owing to the fact that HFSS produced food in the farm last year, the community believes that there is potential in the land so they are preparing to plant maize and sorghum in the recommended methods of farming that they saw in HFSS through the ELNA project.”

With 73% of South Sudan’s population under the age of 30, youth will certainly lead the country in protecting the environment. Organic agriculture is a highly effective way of advancing food security and ensuring stewardship of natural resources for generations to come.

To support Rise Against Hunger’s efforts to Empower Communities worldwide, please give now.

About the Author
Julie Savane is the Senior Manager, Programs, on Rise Against Hunger's Global Impact team. She works with our partners to design and implement agriculture and income initiatives for smallholder farmers and entrepreneurs.
More Posts by Julie Savane