Attendance Increased 35% at Five Schools in Gokwe North, Zimbabwe – Find Out Why

For the last five years, Rise Against Hunger has worked with our partner ADRA International to address food insecurity in Gokwe North, Zimbabwe. What began as emergency school feeding evolved into a sustainable agriculture project as communities in Gokwe North established school gardens and income-generating activities. This is the story of remarkable, real change in these communities — and what’s to come.

It Starts With a Meal: Supporting School Feeding During Severe Drought

In 2015 and 2016, El Niño conditions caused a severe drought in Zimbabwe — the worst that the country had experienced in 35 years. The drought led to reduced crop production and a loss of livestock. And with a large percentage of families in Zimbabwe relying on agricultural production for income, many faced socioeconomic challenges and increased food insecurity.

Food insecurity impacts education, and Gokwe North saw low primary school attendance and a dropout rate of 40%. In response to the emergency caused by the drought, Rise Against Hunger began partnering with ADRA Zimbabwe in 2017 to provide meals for school feeding for more than two dozen schools throughout Zimbabwe. The meals helped meet the nutritional needs of children, encouraged school attendance and supported families as they rebuilt their livelihoods. Over the next three years, the school feeding programs had a substantial impact on education — across the schools served, over 1,000 new students enrolled during that time. 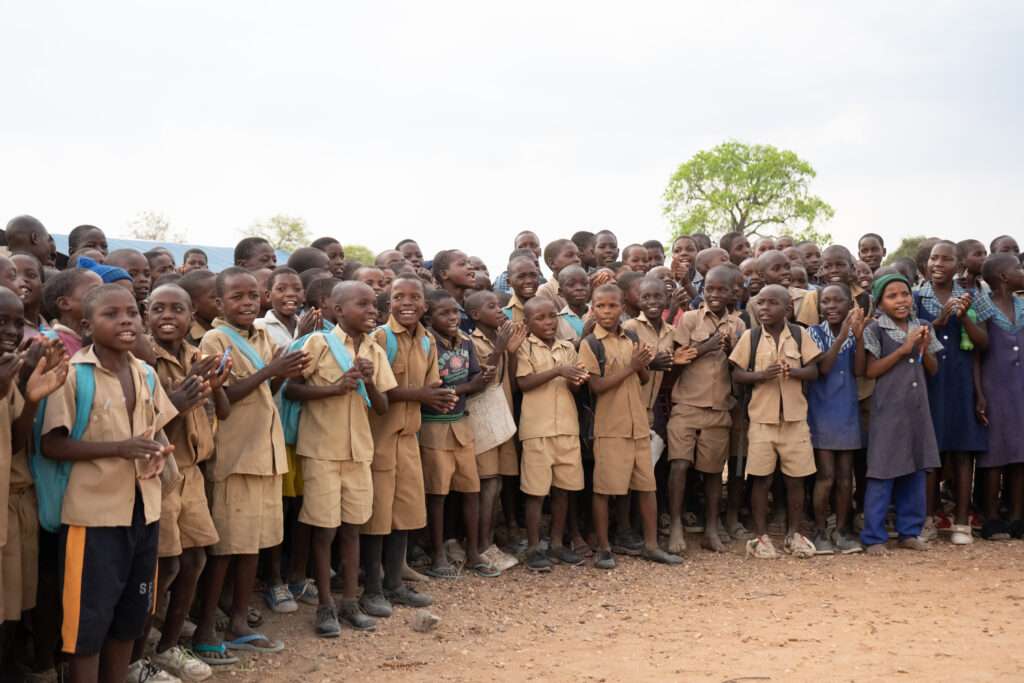 To support long-term solutions to food insecurity, we expanded our work in Zimbabwe in 2019, implementing a sustainable agriculture project called Planting Seeds for Strong Communities.

Rise Against Hunger’s work to address hunger starts with a meal — but it doesn’t end there. In addition to supporting the immediate nutritional needs of people currently facing hunger, we also empower communities across the globe to achieve long-term food security. The expansion of our work in Zimbabwe to include the Planting Seeds for Strong Communities project is a prime example of that approach. Rise Against Hunger and ADRA Zimbabwe began working in 2019 with five schools in Zimbabwe’s Gokwe North district to establish a sustainable home-grown school feeding program. The project aimed to not only continue supporting education and nutrition, but also to build up community resilience and the livelihoods of smallholder farmers.

Rise Against Hunger and ADRA Zimbabwe worked closely with local parents as well as community and school leaders to improve food security at the five schools and in the broader community. Each school established a garden where parents and community members volunteer to grow staple crops and vegetables. The leafy vegetables, cabbage, tomatoes, carrots, beans and onions grown in the school gardens are utilized in school meals. 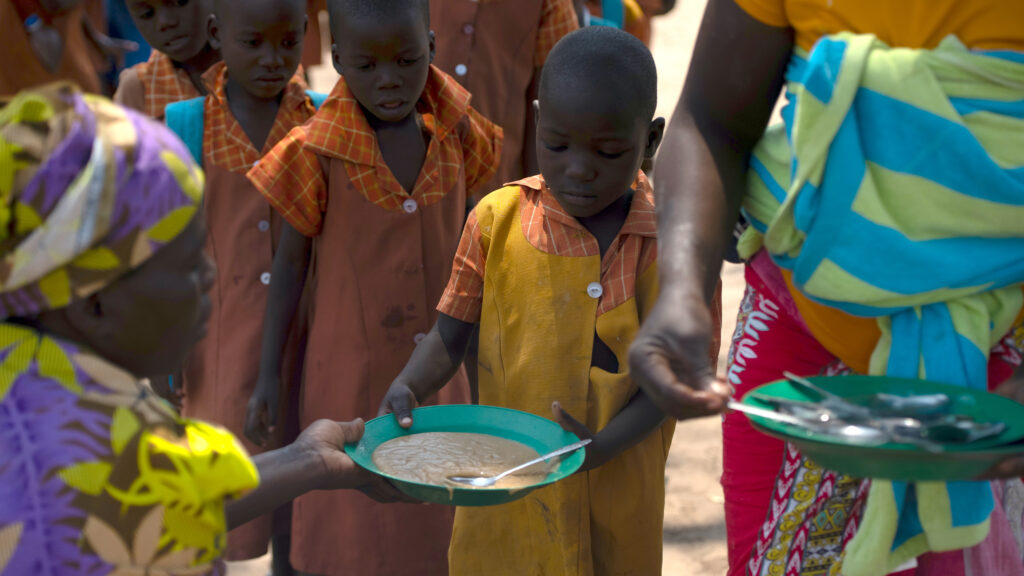 In addition to the gardens, 3,000 farmers received training on climate-smart agriculture, market linkages and new crop cultivation. These crops, including sunflowers, biofortified cowpeas and millet, enabled the farmers to support the school feeding programs and earn additional income.

The five schools received sunflower oil pressing and maize shelling equipment. Farmers pay the schools to use the equipment with a portion of their grain. This allows the farmer to save time with post-harvest processing and supplies the schools with grain to utilize in their meals. 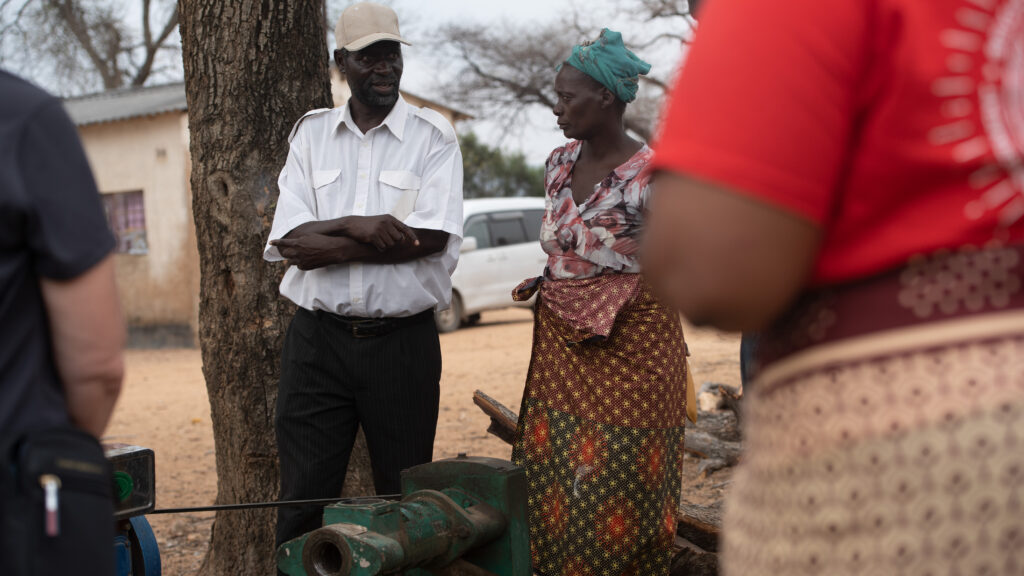 What Happened Next: The Five Schools See Results

The locally grown crops are supplying meals for the schoolchildren, and the shelling machines increased the schools’ food volume by 183%. The schools provide meals for students up to five times each week. The schools have reported improved emotional, physical and social well-being of the students and less bullying as a result of the higher volume of diverse food. The school meals also encourage attendance and academic performance — by the end of 2022, attendance had increased 35% across all schools. 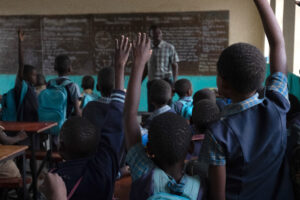 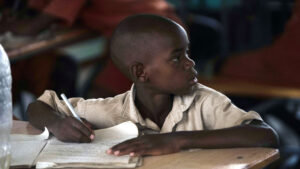 Local farmers are also seeings results! More than 32% of participating households were able to meet their own food requirements during one year. This is a significant increase and a positive change. The shelling and oil pressing machines enabled farmers to process crops that they can use to feed their families or sell for additional income. Siphiwe, a farmer and mother, said, “If you have one bucket of sunflower seeds, you can get two gallons of cooking oil. This year I managed to get 32 buckets of sunflowers.”

Real solutions to end hunger do exist — and the impact in Gokwe North highlights how true this is. One school, Manyuli Primary, is now self-sufficient, utilizing food grown with its own community to feed their students. The other four schools also seeing progress, and Rise Against Hunger and ADRA Zimbabwe are working to empower these schools toward self-sufficiency.

You can learn more about the project in the video above. As it shows, Rise Against Hunger’s work starts with a meal, and it leads to resilience and empowerment for communities — like Gokwe North — worldwide. Please support this work by giving today.