Jamesly is Growing Opportunities for His Community’s Future

Living in a supportive community in the Artibonite department of Haiti, 22-year-old Jamesly wants to give back and support others there by becoming an agricultural technician.

Jamesly’s community is in a rural area with inadequate roads, limited access to electricity and high unemployment rates. This can make nutritious food hard to come by for many in the community. Jamesly often found it difficult to find food to eat and felt weak.

Through the agriculture training program he attends, he began receiving Rise Against Hunger meals distributed by partner Salesian Missions. He now has plenty of energy to study in the program. “By eating a hot dish, I have the strength to work for a whole day,” said Jamesly. 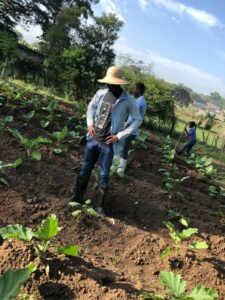 Louis, the director of the agricultural technical school and Jamesly’s mentor, has noticed how Jamesly has changed since the nutritious Rise Against Hunger meals began to be distributed at the center. Louis said, “He is a hard-working student who sets clear goals and does what it takes to achieve them… Jamesly has become more enthusiastic in his studies and his work in the fields. I am proud of him because I feel that he is gradually being built and is preparing to invest in the construction of his country and his locality.”

Lephene, Director of Salesian Missions, said that when the young people arrive at the center for the program, “they can find a hot dish and it suits them a lot, encourages them to work in their learning and they can return to their family in the afternoon without too much difficulty. Sometimes it is the only dish that they receive during the day. This means that this food is extremely important for their physical development.”

Jamesly is set to complete the agricultural training program in three years, and he wants to then utilize his skills and knowledge to help his community and country produce more food. With a goal to become an agricultural technician, he plans to create a farm with a chicken coop to give people in the area access to types of nutritious food that are typically hard to come by.

The preparation for Jamesly’s future starts with a meal. It will lead to him serving and empowering his community. Join our It Starts With a Meal movement to support futures for people like Jamesly around the world!