From Emergency to Sustainability: School Feeding in Zimbabwe

When a drought hits a farming community, the impact is severe and the recovery long. In 2016, El Nino-induced severe weather struck 11 Southern African countries, many of which experienced their worst drought in 35 years. Not only did rainfall decrease, but temperatures increased significantly, causing widespread crop failure. (Source: SADC Regional Vulnerability Assessment and Analysis Synthesis Report 2016). 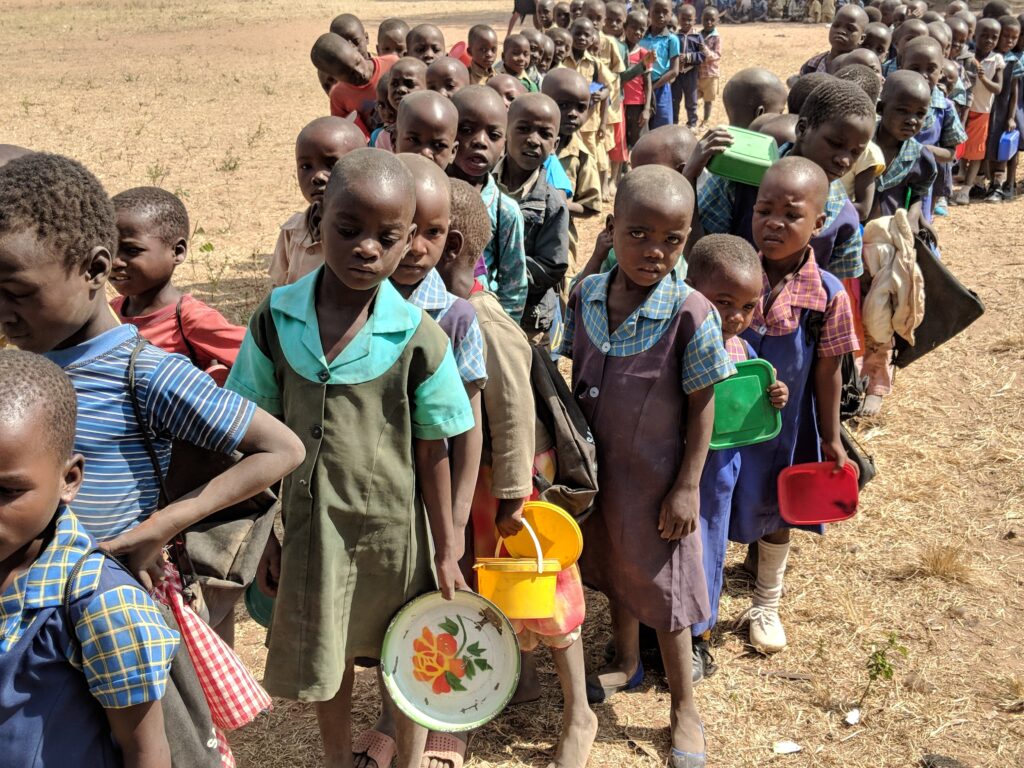 To mitigate the worst effects of this drought, Rise Against Hunger and Adventist Development and Relief Agency (ADRA) launched the Southern Africa School Feeding Initiative (SASFI) in 2017, providing a daily hot meal for students in five countries.

This provided relief to financial stress for families, knowing that their children would be fed at school. Most targeted schools reported increased enrollment over the course of the three-year initiative.

In the Gokwe North district of Zimbabwe, one of the project areas, 49% of the population was experiencing food insecurity by 2017. Ms. Muzanadzo, the principal at one of the participating schools, highlighted the difficulties of students prior to the school feeding initiative. 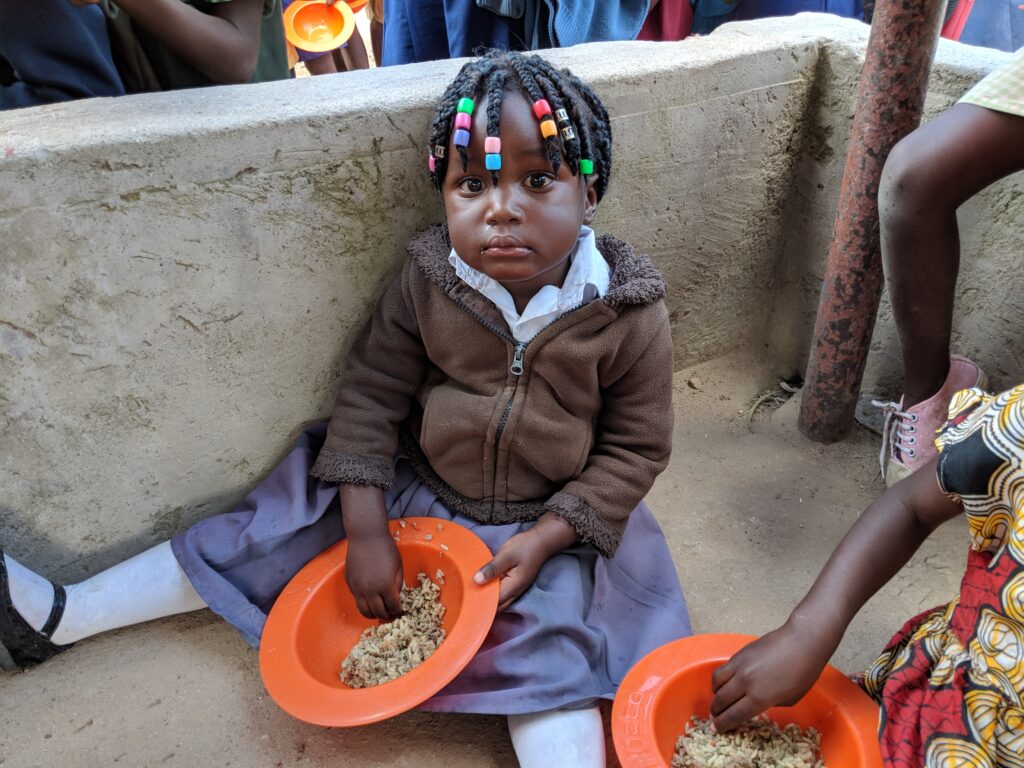 “School kids used to come to school and complain of stomach pains,” Ms. Muzanadzo shared. “We used to think they were sick but then realized that they were just hungry. After probing them if they had a meal before coming to school, they said they did not due to poverty. This caused low concentration in class. The coming of the food assistance came as a blessing to the school as it solved problems of kids coming to school hungry.”

Even in the face of severe crop failure, the families and school staff in Gokwe North showed determination. After two years of serving Rise Against Hunger meals, provided by Rise Against Hunger Italia, the community members began preparing to implement home-grown school feeding (HGSF). 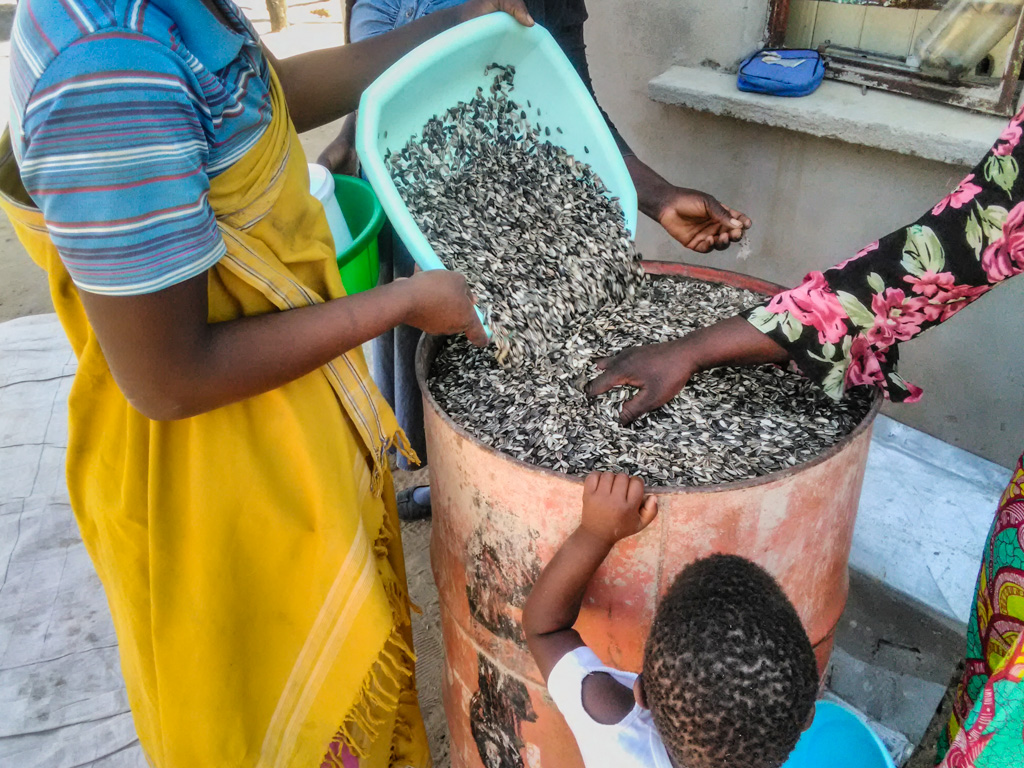 HGSF is a model in which schools, with strong parental involvement, produce food at the school site and conduct income-generating activities (IGAs) to earn funds to purchase additional ingredients. In 2019, Rise Against Hunger and ADRA Zimbabwe launched a home-grown school feeding initiative in Gokwe North, called Planting Seeds for Strong Communities. 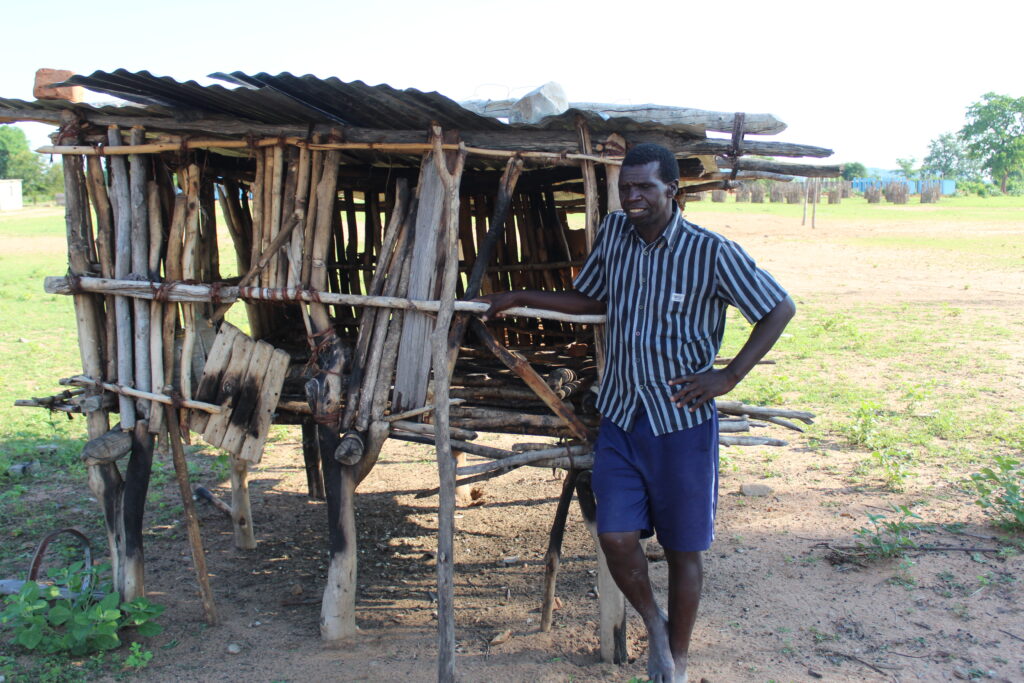 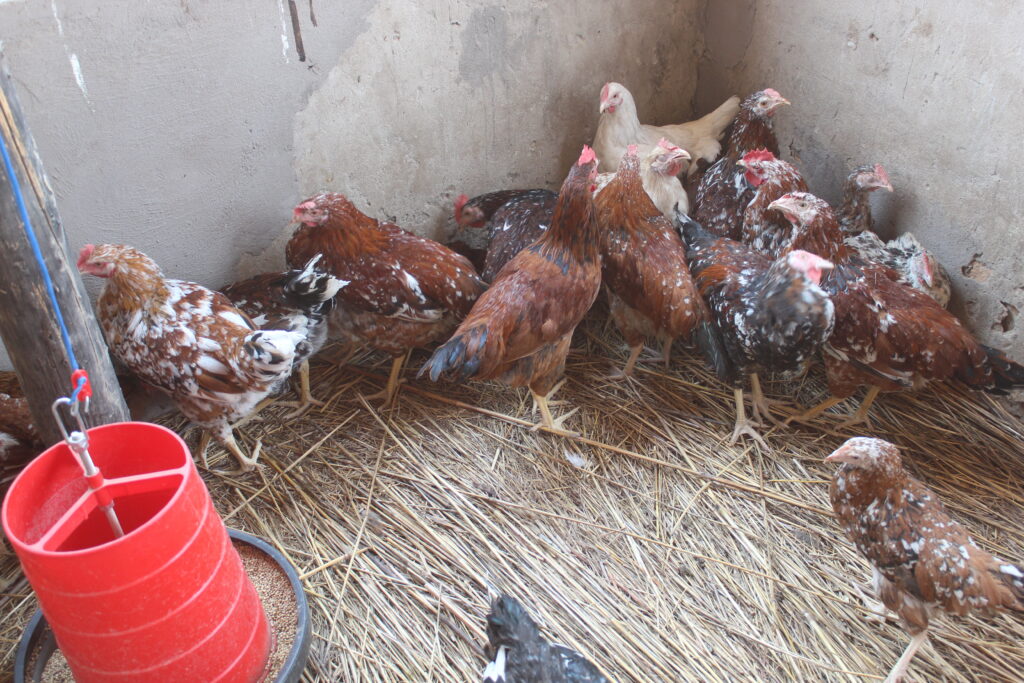 By increasing food production in the community, families become more food secure, and schools can purchase surplus food for the school meals.

Two keys to success for home-grown school feeding are diversifying food production and finding win-win solutions for schools and the farmers. Grain and seed processing machines hit the sweet spot.

Shelling maize and millet by hand is time-consuming and labor-intensive, taking days or even weeks to complete the task. Schools in the project were equipped with motorized shellers, which could complete the task in just a few hours. To pay the school for the service, farmers pay a percentage of the shelled grain to the school, giving it the name “toll-shelling.” Another new crop — sunflowers — is thriving in the dry conditions and alleviating families’ grocery bills. 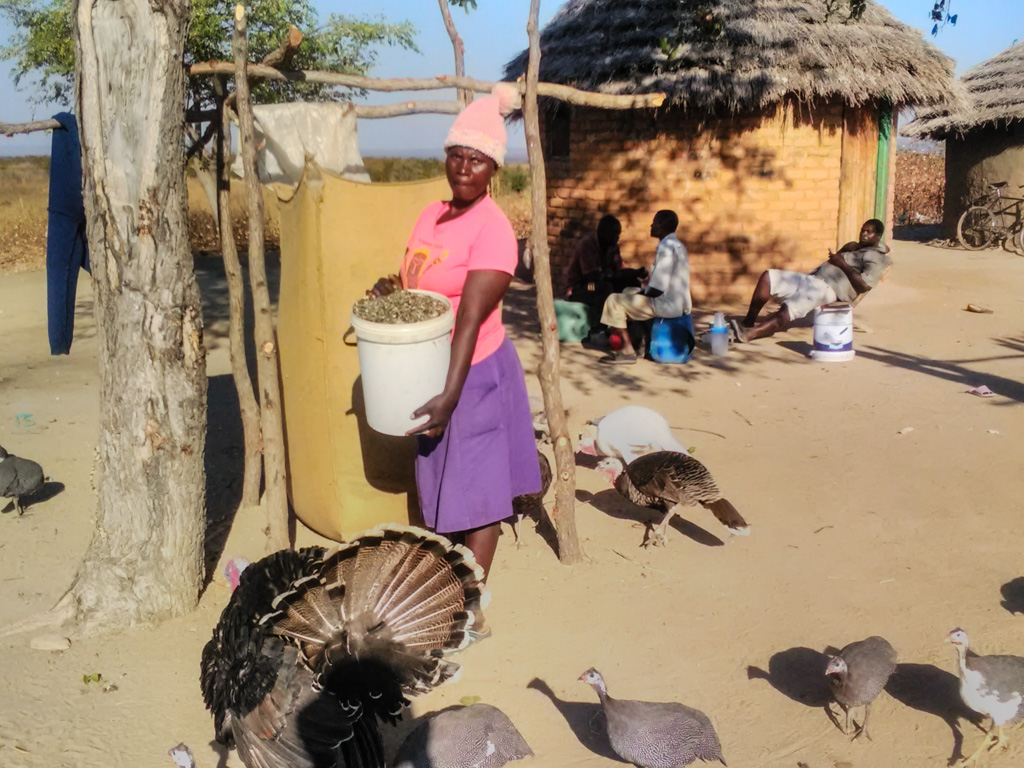 Cooking oil is expensive and hard to find in Gokwe North. Through the project, oil presses were provided to the schools, who also make oil pressing available as a paid service in the community. One farmer, Siphiwe, age 36, pressed enough oil to supply her household needs for a year! And she feeds the sunflower cake (the remainder of the sunflower after pressing) to her flock of turkeys. 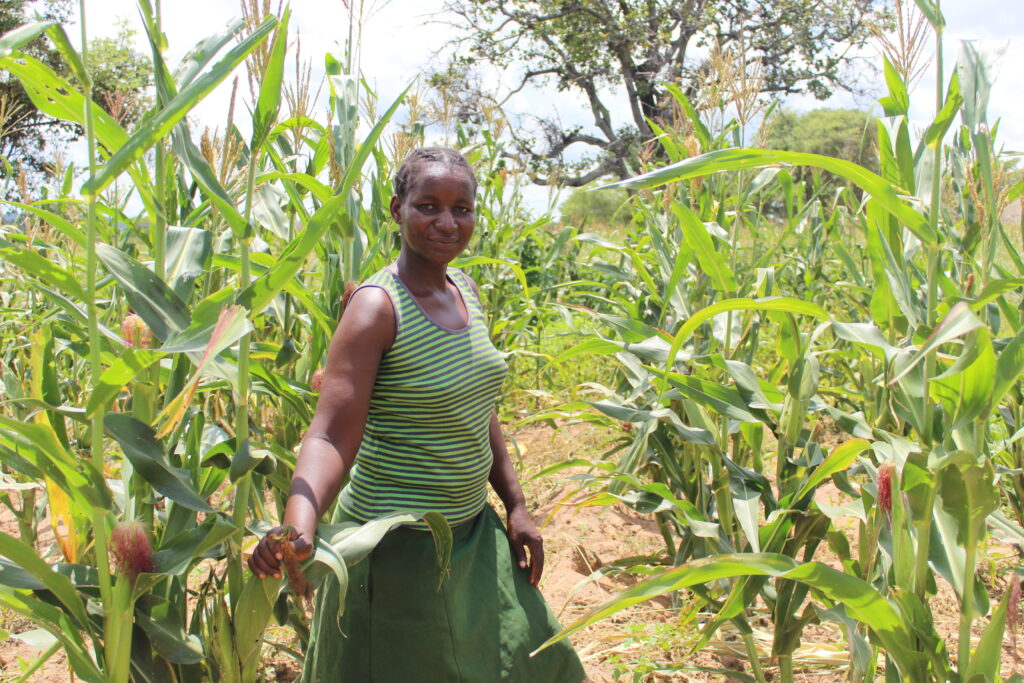 Because of the ease of processing, farmers feel motivated to grow even greater quantities of maize, millet, and sunflower in future years. Through the in-kind fee for processing, the five schools have gained a total of 48,402 pounds of food for the school meals! That is more than the quantity of food in one shipping container of Rise Against Hunger meals.

As project staff, school staff and farmer participants prepare for the next harvest in early 2022, they continue to implement and share the improved agricultural practices with an objective of reaching 3,000 total farmers by year’s end. 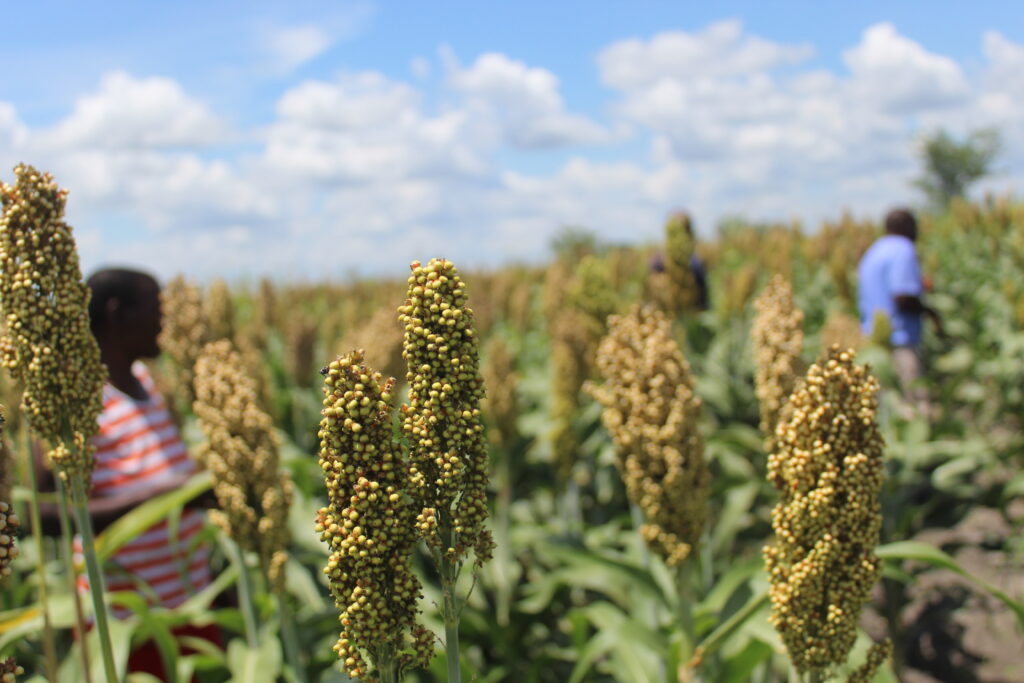 The combination of school garden production, income-generating activities and increased community food production are expected to support the sustainable operation of the home-grown school feeding for years to come.

Are you inspired to support sustainable solutions to hunger this holiday season? Please give now.

About the Author
Julie Savane is the Senior Manager, Programs, on Rise Against Hunger's Global Impact team. She works with our partners to design and implement agriculture and income initiatives for smallholder farmers and entrepreneurs.
More Posts by Julie Savane