At Rise Against Hunger, we know the power of growing the movement. When an organized group of individuals come together for a common goal, they have the power to create a movement that leads to change on a global scale.

On April 22, 1970, 20 million Americans rallied together for the first Earth Day. They were unified by their shared concern for what famed CBS News correspondent Walter Cronkite called at the time, “the fouled skies, the filthy waters and the littered earth.” The collective action of those 20 million Americans in 1970 sparked a movement that currently mobilizes 1 billion people in 192 countries annually to create awareness and protections for our shared planet.

As we celebrate Earth Day this year, it is important to recognize and bring awareness to how climate change is impacting low-income communities. Low-income communities, who contribute least to greenhouse gas emissions, are most affected by climate change. According to the FAO, the intensity and frequency of natural disasters have increased and will continue to do so. The USDA warns that a warming planet will disrupt food production, lead to increased prices, decrease local availability and contribute to food insecurity.

The agricultural industry accounts for 70% of the world’s water usage and makes up 24% of global greenhouse gas emissions. With half the human population living in urban settings, transporting food far distances from farm to plate contributes 14% to emissions. Growth models focused solely on maximizing production, without care for the environment, are detrimental to the long-term feasibility and sustainability of agriculture.

If our behavior does not change, hunger will increase and conflict will arise over access to depleting resources. That is why environmental sustainability is integral to Rise Against Hunger’s food security projects.

In India, Rise Against Hunger India works with 2,500 smallholder farmers in the state of Odisha to scale millet production and create an end-to-end value chain, from production to consumption. 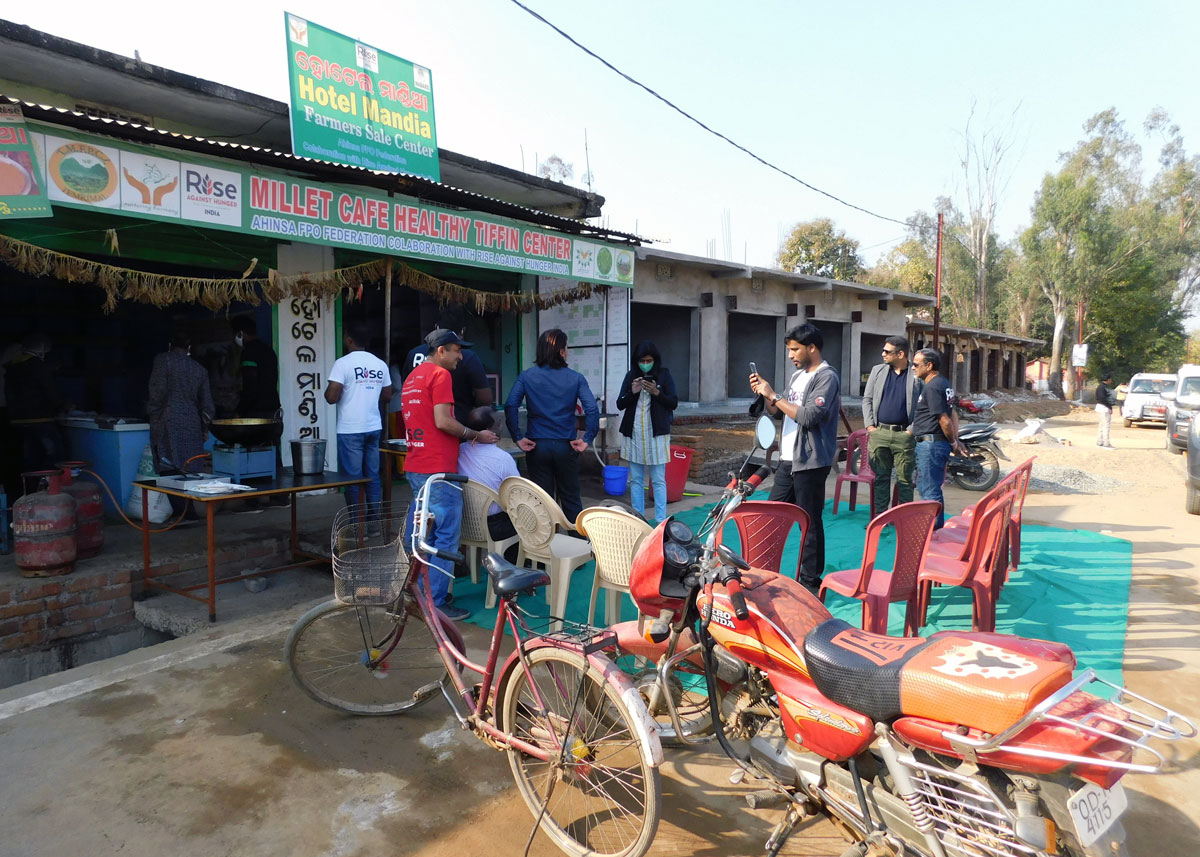 Millet is an indigeneous whole grain packed with protein, antioxidants and nutrients. It needs little water to grow, making it climate-friendly in a region facing climate-related issues such as droughts, monsoons and heat waves. The project improves soil health through organic fertilizer methods such as composting with worms, called vermicomposting. 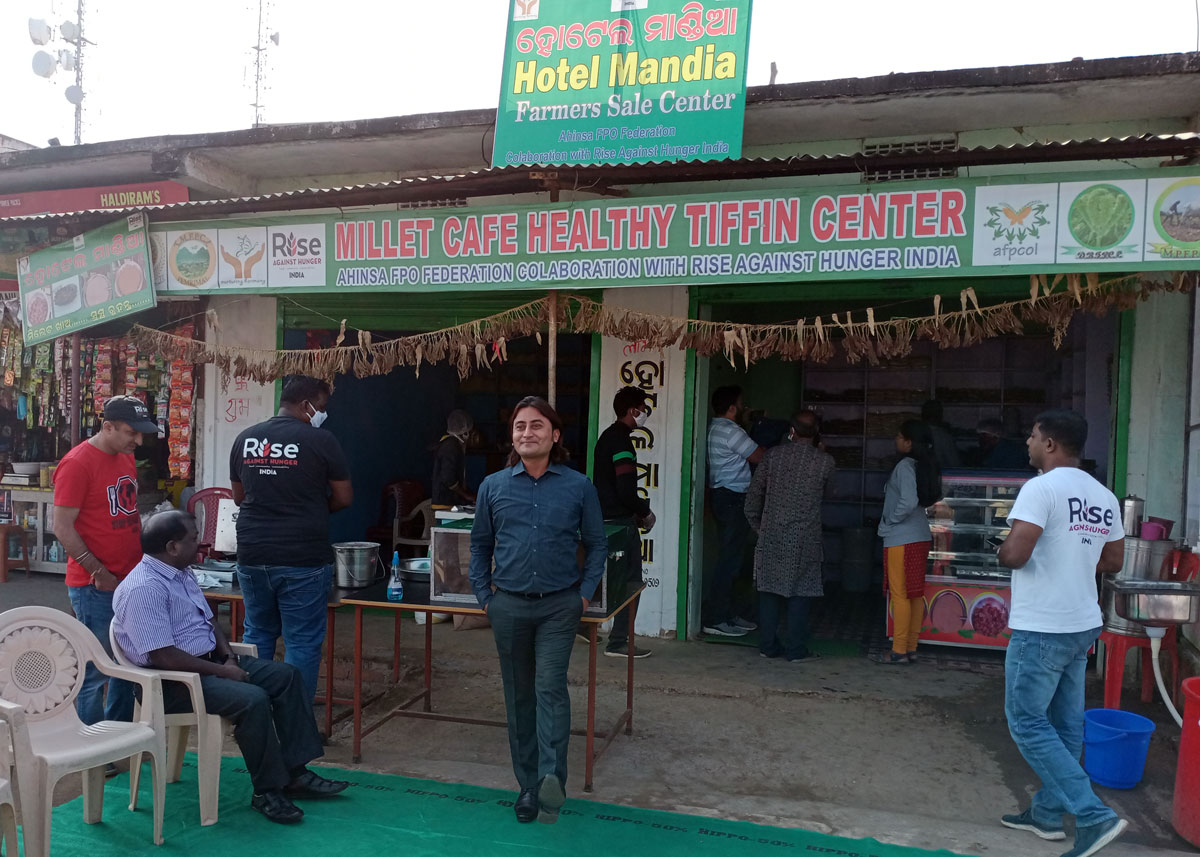 Farmers also have access to food storage, processing facilities and a roadside restaurant started by the Farmer-Producers’ Organization. The restaurant serves millet-based food items and educates consumers with recipes and its benefits.

In Mali, through our local partner AMEDD, Rise Against Hunger has a climate-smart agriculture project, called Elevating Women and Youth Farmers, where land is sustainably managed to address the interconnected challenges of food security and climate change. Mali is a landlocked country where the majority of the land is arid or desert and faces severe droughts and flooding due to climate change. 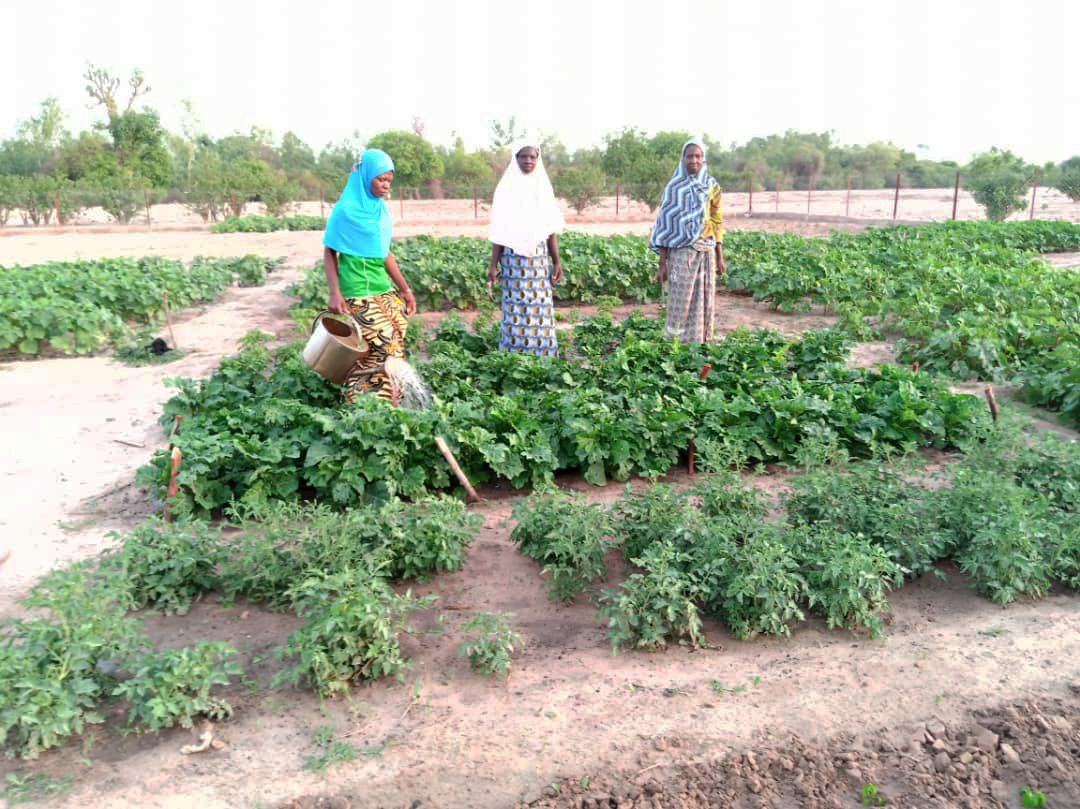 Thousands of women and youth farmers are trained using water management practices, including storing water in wells and basins, mulching to retain soil moisture and scheduling the use of water to irrigate crops. In addition, farmers are carefully selecting seeds to grow diverse crops that fix nutrients in the soil and require less water.

So, what can you do — both this Earth Day and beyond — to get involved and support environmental sustainability and food security around the world? You can join the sustainable movement to end hunger in three ways!

First, donate to support Rise Against Hunger. Your donation will enable impact for the people we serve, like the farmers using sustainable agriculture practices in India and Mali, and support our work to alleviate hunger across the globe.

Second, buy from local farmers if you have the means. Have you heard of community-supported agriculture (CSA)? CSA members pay for a share of the harvest that comes in the form of regular food boxes. It’s a win-win — you get sustainably grown food that travels a short distance, and the farmer receives financial security.

Last but not least, own your purchasing power. When spending money, ask yourself if the business operates in a linear model or a circular model? Linear models take resources, produce a product and create non-recyclable waste and pollution, whereas circular models are designed to sustainably use resources to recycle and regenerate waste back into the economy.

About the Author
Andrew Sullivan, MIS is the Director of Program Management for Rise Against Hunger. Andrew is a human-centered, impact-driven and strategic international development professional with 14 years of experience.
More Posts by Andrew Sullivan